There is one over-riding reason why this challenge made its way onto my list… and it’s because I fundamentally don’t understand how you can put ice-cream in the oven without ending up with an unholy mess!!

No matter, I was keen to have a go and was prepared for the post-challenge clean-up operation, should it come to that.

The ‘construction’ part of the dish started yesterday. Not content with a bog-standard Baked Alaska, I had elected to make life slightly more difficult for myself by creating a neapolitan Baked Alaska with vanilla, strawberry and chocolate layers. First task was to line a dome shaped dish with cling film, which would apparently facilitate separating the bowl and the frozen ice-cream dome. I had to soften each flavour of ice-cream in a food mixer and pack it into the bowl, returning the bowl to the freezer after each layer in order for it to re-set. Vanilla first, an hour later strawberry, then just before bed, chocolate. 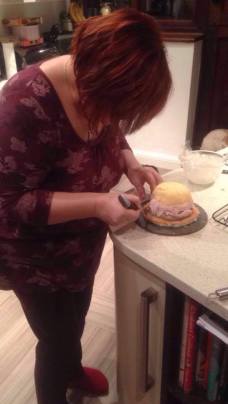 This afternoon, I made a fatless sponge layer. Once completely cool, I had to sit the ice-cream dome on top of it, remove the bowl and cut the sponge to size. So far, so good.

Then on to the meringue. 4 egg whites, 8 oz of caster sugar and some lemon juice (apparently an adequate replacement for Cream of Tartar, which as a non-baker I don’t happen to have in my cupboard). Whisked to stiff peaks, the idea was then to spread the meringue over the ice-cream dome and … well, ‘swirl it about’ a bit I guess! This part was fairly tricky, as the meringue kept gravitating towards the baking tray rather than sitting beautifully atop the ice-cream… I had to enlist the help of Georgia for this part – Time was of the essence, as the idea of meringue mixed with melted ice-cream at this point was not one I wanted to entertain 😮

Finally, the meringue was successfully applied… and in to the oven it went! Just 4 minutes.  I kept a watchful eye, with a constant expectation of seeing dripping ice-cream. But no. Time up, and out of the oven it came, to be ‘browned off’ with my newest toy – the kitchen blowtorch.

And so, all that remained was the taste test… An all-round seal of approval from both of my children and from my next-door neighbours who were treated to a slice. Happy with that I am 🙂 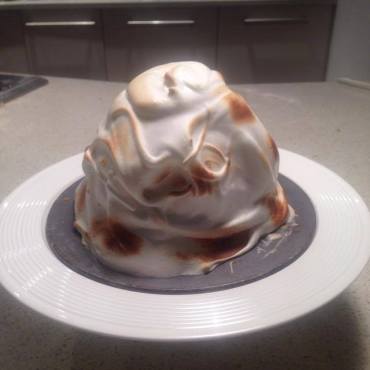 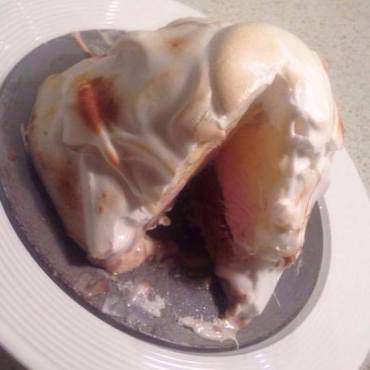