I like driving. And there are several types of driving that I fancy having a go at… skid pan, rallying, supercar… and off-roading, which I tried today 🙂

After challenge #18 I struck up a conversation over Twitter with Tori James (www.torijames.com), a fellow adventurer… albeit with somewhat more experience than me!! Tori’s Dad, Richard ‘Jumbo’ James owns and runs Wood Park Off-Road in Pembrokeshire, and having heard that ‘Go off-roading’ was one of my challenges, Tori passed on her Dad’s contact details. That was back in May… and it’s taken me some time to fit this challenge into the schedule, but at 9 a.m. on a post-Christmas Bank Holiday, I set the satnav for New Moat, Pembs and off I went.

On my arrival, I was greeted by Jumbo and we talked through what my off-road experience would entail. It was going to be important that I knew my left and right, that I understood the turning instructions and that when I was told to stop, I would stop! Having signed to say that I understood the risks involved in the activity, we were set to go. We were going out in ‘Victor’ the LandRover. Jumbo drove to the start of the trail, and then we swapped seats and I took the wheel.

The first bit of driving we did was over something resembling a BMX course for LandRovers! Slopes of varying degrees of steepness, twists and turns, muddy tracks, furrowed tracks… a good opportunity to get a feel for the vehicle. I begun to appreciate when to drive and when to let the vehicle drive itself, and that turning the steering wheel did not always bring the outcome you might expect!!

Next we drove into a small quarry, with some rather steeper gradients and bends and the added presence of water… I managed a steepish descent, and we then rounded a bend to try the opposite ascent… #Fail! I think I was a little ginger on the power. We reversed back down to give it another go, and this time with added ‘welly’ I made it!

Then it was off out into the woods. The tracks were deep and slippery, and occasionally Jumbo would instruct me to follow one side or the other of the tracks in order to avoid tree roots or boulders. I learned to treat innocent-looking puddles with respect, as some of them were rather deeper and less innocent than they at first seemed. We drove some very rocky paths, almost got stuck under a fallen tree, and had an interesting time trying to round a hairpin bend using the art of the ‘pendulum’ manoeuvre. Patience can certainly be a virtue when off-roa

ding, as slowly inching left / right / forward can mean the difference between making a turn or driving straight into a bank. Jumbo rocked the LandRover between first and reverse, until the angle of the vehicle had altered sufficiently to make the bend. Going out deep into the woods was great – lots of different terrains / obstacles to encounter and different skills to try, all in a beautiful setting. It was also fabulous to be followed round the trail by robins and yellowhammers.

After being out for just over an hour, we started to head back to the quarry and ‘BMX’ area. It was time to try some of the more challenging inclines…! We drove furrows which tipped the vehicle so far sideways that either driver or passenger could reach out of the window and pick the grass… we ‘tobogganed’ down hills (that’s a polite term for ‘slithered’ I think…) and negotiated muddy bends sideways, which was very entertaining!! 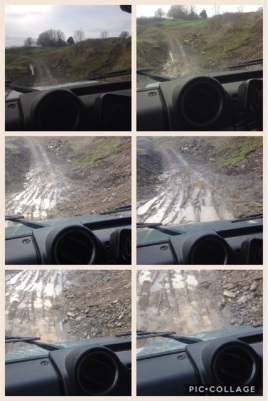 And then the ‘piece de resistance’ was to go over a ‘cliff edge’ into the quarry, which entailed going up the hill, so that all I could see out of the windscreen was sky… and then down the hill the other side, at which point it looked for all the world as if we were about to plant the LandRover nose-first into the ground. Amazing!

I thoroughly enjoyed the two-hour experience and would love love love to do it again. It taught me that a sturdy vehicle with big wheels is only the start of off-road driving, and that there’s a lot of skill to driving safely and successfully without either getting stuck or writing off your expensive LandRover!! My shoulders and thighs felt like I’d been to the gym by the time we got back to the farm, but on the up side, the drive back to Cardiff on smooth tarmac roads was a breeze.

Thank you Jumbo for being an excellent instructor. I’d love to come back someday… anyone coming with me?