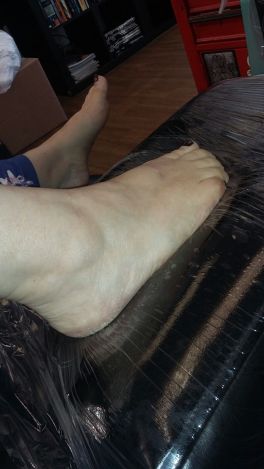 I have wanted to get a tattoo for years, so adding ‘have a tattoo’ to my list of 50 things was a no-brainer. Which just left me to firm up those perennial questions of what and where…

I collected a number of ideas on a pinterest board and visited it on and off to see which ones I liked most and consistently. After all, this was a ‘for life’ decision. I even went so far as to share my board with friends, and invite comments…which I most certainly got, ranging from ‘Don’t do it!’, to novel suggestions and a recommendation for which tattoo parlour to use.

So last Saturday, having had some conversations via Facebook with the tattoo artist, I went down to Physical Graffiti on City Road to discuss my design and book my appointment. Not your average ‘backstreet’ tattooists these – a fresh, clean, welcoming shop. And they were fab – clear explanations about why some of my ideas wouldn’t work; advice on size, shape, font… I felt confident, paid my deposit and booked my slot for one week’s time. When I left with my appointment card in hand, I was truly excited.

By this morning, I was feeling slightly sick! Apprehensive, but still excited…and most definitely still up for it. My friend Kate had offered to come for moral support and to assume the role of official photographer. Can’t think of anyone better – a qualified nurse, so if all went tits up, help was at hand!!!

We arrived at Physical Graffiti at 2pm. I had to sign a declaration that I was voluntarily being tattooed, wasn’t under the influence of drink or drugs (not yet!) and realised it was permanent. Yes, yes, yes… and yes, I’m over 18 😉 Then I met my ‘artist’, Paul. I had been asked to send through a picture of my proposed design when I booked the appointment. At this point I was still dithering between three slightly different versions… but what I hadn’t expected was that Paul, having reviewed my ideas, would have produced a bespoke design based on them. Which I instantly fell in love with. No question, that was it. There was a slight issue in that the design was backwards – he’d planned for left foot, I wanted right – but it took just a few minutes to redraw the stencil.

I sat in the chair. We discussed the exact positioning, and he applied the stencil so that I could make sure it was where I wanted. Yes. And then we were ready. “I’ll just do a dot, so that you can get the feel of it”, he told me. That was ok… and so it began.

I was actually amazed how little time it took. Probably a good thing for a tattoo virgin like me!! Kate videoed little bits and photographed others… There were times when it did hurt – near my toe was okay, but the further up my foot he moved, the more it hurt. I remembered to breathe and kept telling myself that it wasn’t as bad as childbirth and that the result would be worth it. I admit, I let the occasional ‘ouch’ slip, but honestly it was nothing a little gritting of the teeth and two paracetamol couldn’t take care of.

By 2.30 it was done. Paul explained the aftercare to me, and then wrapped my foot in clingfilm to keep it clean for the next couple of hours. I hobbled to the cash desk, and then to the car with one shoe on and one in my hand. Perhaps I’ll try flip-flops tonight…

And so it’s done. Two weeks for my foot to heal and be back to normal…

Well, normal with a tattoo on it. One which will serve to remind me of my adventures this year. Perfect. 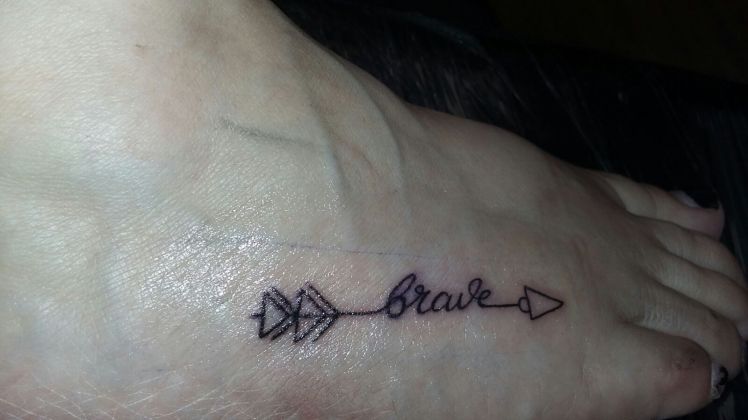