Changing life one adventure at a time…

Since the divorce I’ve had to ’embrace’ the 9-5 culture, as the luxury of part-time / pocket-money jobs was no longer mine. I was fortunate to find a job that’s geographically quite close to where we currently live, and to find a very pleasant route to work that involves by-passing the traffic queues and instead navigating some winding lanes and pretty scenery (usually all good unless I meet a large something coming the opposite way). I tell you this because one of the potential downsides of the location of our new house will be the impact on my daily commute. Being more ‘central’, I will not have the option of country lanes any more, and the prospect of the urban commute – especially the last bit of the journey, which can take 10 minutes to travel 500 metres – has been bothering me a little.

Well, I am nothing if not resourceful. And so it was that I decided to investigate, and indeed undertake CBT.

I bet most of my friends are currently wondering what Cognitive Behavioural Therapy has to do with a daily commute… That’s what CBT stands for, right?

Turns out it also stands for Compulsory Basic Training, which is the minimum required training to allow you to be road-legal on a scooter, moped or motorcycle up to 125cc. And that, dear friends, is what I have achieved today!

I passed my driving test at the age of 17. I think I’m a pretty good driver. A little impatient sometimes, but generally safe and confident. It’s second nature to me now, the hand / foot / gear / pedal co-ordination. I felt it would naturally stand me in pretty good stead for riding an iddy-biddy moped. Hmmm…

So, I arrived at 8 a.m. on a (thankfully dry) Sunday morning to Taffs Well Primary School, where I was met by Simon from Celtic Rider Training. First job was to kit up with a jacket and hi-vis vest, a helmet and gloves. The jacket wasn’t too much of a problem, nor the gloves, but I have learned that helmets are a very particular fit, especially for those of us who wear glasses. My ears have suffered today! A brief safety talk was followed by a ‘tour’ of the machine and its functions and learning how to take it on and off its stand. Sounds simple, but there’s a definite technique to it. And then we were allowed to actually start it…

I was quite glad to spend the morning in the confines of a school playground, where the only things I was likely to run into were walls and cones! The last time I rode any kind of bike was for challenge number 9 (Cycle a lap of the velodrome)… and that one had no brakes! Surely if I could manage that I could manage this thick-wheeled 50cc moped?! In fairness, in spite of initial wobbles I felt that I began to feel more balanced quite quickly and was chuffed when the instructor conveyed that he was impressed at my control of the bike. I have to say that I found it quite challenging to be controlling acceleration and braking with my hands, especially since at times my right hand was doing both. We went round in circles for a while, then tried tighter turns which involved balancing the amount of throttle and brake used in order to slowly turn without falling off 🙂 Then emergency stops, a little more of the theory of managing a bike on the road, and a very welcome cup of tea. 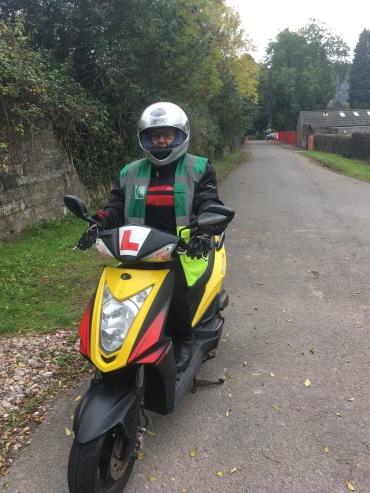 In the afternoon it was time to go out on a supervised road ride. Instructor plus two riders, kitted out with a radio / earpiece so that we could receive instructions and directions. I have to tell you, that first manoeuvre of pulling from the school out onto the road was flipping nerve-wracking!!! We went about 100 meters before turning into quieter side streets. We had to practise indicating, turning left (easy) and right (not so easy), roundabouts (small ones – easy… then bigger ones – bloody scary!!). I was occasionally told I was being over-cautious at junctions (yes, that’s because I want to live to see 52!!), and frequently told to give it ‘full throttle’ (actually I felt I was going quite fast enough, thank you…). We rode through Taffs Well, Nantgarw, Upper Boat, back through Taffs Well, into Radyr and onto Llantrisant Road, stopping every now and then for some input from the instructor. Mostly quite complimentary I have to say. We were on the road for two hours in total, and I have to admit when we got back to the school I was glad to get off the bike and remove that goddamn helmet.

And that was CBT. Did I enjoy it? Yes, definitely. Were there instances when I was petrified? Oh yes…. and times when the instructor praised my ‘control’ and I’d felt about as far from being in control as I can remember.

Nevertheless, I now have a certificate that says I am legally allowed to ride a moped / motorcycle on the road. Which I might just do… once I’ve bought a machine and a helmet and clothing and gloves and … and… and … Watch out, new adventures here I come!

One thought on “A distraction from the moving countdown…”