It’s been rather a long wait for this challenge to come to fruition! I received a voucher for a helicopter ride over Cardiff, Cardiff Bay and the South Wales valleys and coast as part of my birthday gift from my wonderful friends. After four cancelled dates, today (two days before I turn 51) the weather looked a lot more promising and when the text came through to confirm that flights were going ahead, I was pretty excited!

HeliAdventures fly out from the Aeros Training base behind Cardiff International Airport, where I arrived for a pre-flight safety briefing and coffee before the 11.25 flight. I had decided to pay a supplement to guarantee being in the front co-pilot seat, since I figured that on what could be a once-in-a-lifetime experience I’d be wanting the best possible view! I donned my hi-vis jacket and headphones, fastened my 4-point seat-belt and we were good to go.

We took off pretty gently, following the runway to the east of the airport and off down the coast towards Lavernock Point and Barry. It was lovely and sunny and the view was terrific. Cosmeston Park to the left, we continued over Penarth and then Cardiff Bay, which looks magnificent from the air. I got an amazing view of the St.David’s Hotel, the Wales Millennium Centre, the International Sports Village and the Bay itself. 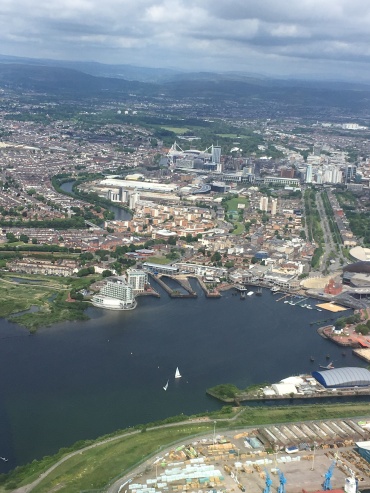 We continued to skirt around the City Centre, basically following Rover Way out to the eastern edges of the city. We flew over Owen’s school, and north towards the M4 (over my office!), when suddenly I realised that we were about to pass over Lisvane! ‘Ooooh, we’re going to go over my house!’ I squealed into the mic. And we did. I managed to get one pic, although my attempts to zoom in were unsuccessful.

We continued to follow the M4 along the northern perimeter of Cardiff, over Taffs Well Quarry, Castell Coch, over Caerphilly mountain and along the A470 until we flew over the University of South Wales and Pontypridd Lido. Then we started to turn and head back towards Cardiff. As we turned we had to fly across the stream of the wind… which created a brief episode of turbulence and a pathetic girly ‘exclamation’ from me!!!

Following the Taff southwards, we flew over Radyr, where I got some great pics of my old school and the village I grew up in. On over Whitchurch, Llandaff, and the Cathedral towards the City Centre again, where we skirted the edge of the Principality Stadium.

The final leg of the flight was out towards the Vale, over St. Fagan’s and Dyffryn House – the gardens of both looked amazing – and then directly south towards the coast and the airport.

The half hour flight was over all too soon. I really enjoyed seeing my home city from the air, and knowing Cardiff so well, knowing exactly where we were at all times. A really fantastic experience, well worth waiting for… Thank you to everyone who contributed xx. 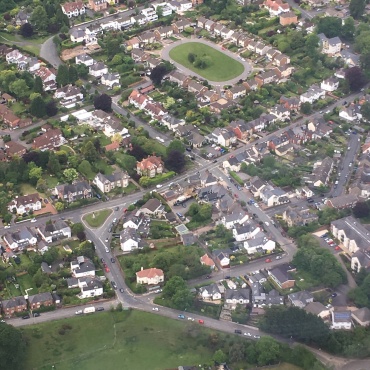