I’m Welsh, born and bred. Lived here all through my childhood, and most of my adult life. How, then had I never been to what has often been described as one of the most beautiful beaches in Wales (if not the UK)? Hence the inspiration for adding a visit to Barafundle Bay to my list of 50 things…

I was accompanied on this visit by Jo and Helen. We met at Stackpole Quay in perfect September weather and prepared ourselves for the walk to Barafundle by indulging in coffee and Welsh cakes / bara brith…as you do… Then we set off along the cliff path.

We had been told that the walk would take approximately 20 minutes and would involve steps at either end. The 45 steps up to the cliff path weren’t too bad, and as we emerged at the top we got our first taste of stunning views across the cliffs and bays of the Pembrokeshire coastline. We continued along the path, which became increasingly grassy, until we got our first glimpse of the bay to which we were headed, with the sun shimmering on the sea. However it wasn’t really until we reached the top of the steps which led down to the beach itself that we could really see just how stunning it was. 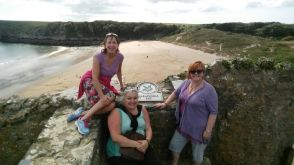 Photo opportunity, and then down the steps…ever conscious that what you go down, you must always come back up again!!

What an amazingly beautiful place. The beach was golden, the sand soft underfoot. The sea was blue, shimmering and begging me to paddle in it, which I did. It was quiet… just a few people and a few more dogs…and warm. A veritable assault on the senses. We stayed for about 20 minutes, before making our way back along the cliff to the car park, and then on to the Stackpole Inn for a well deserved lunch.

A beautiful place and a very enjoyable day- thank you Helen and Jo for your company. 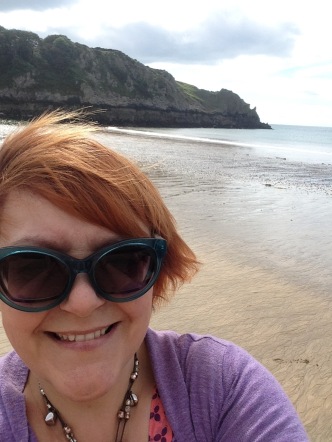 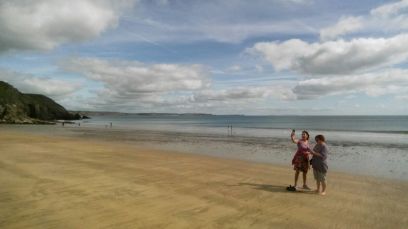 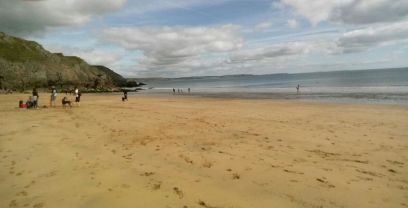 One thought on “32. Visit Barafundle Bay”