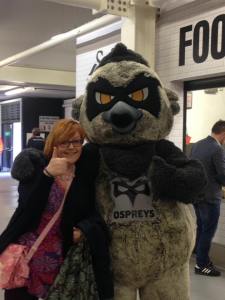 Lads and Dads – now that’s one thing. But being single Mum with son on rugby tour made me nervous. Especially since for the past few years it has been my ex-husband who has taken him.

I’d have to say that I have flagged ‘taking turns’ to do the rugby on a Sunday morning as something positive to come out of separation/divorce. We had reached a point pre-separation where he did son’s activities and I did daughter’s…and I think we both missed out. I have actually enjoyed being on the touchline and watching the team. And hey, if I’m going to get to wash the dirty kit anyhow, I may as well see it in action!!

So, having contacted the team manager/tour organiser Vicky to check that I wouldn’t be the only Mum going, I paid up and put ‘Rugby tour’ on the calendar for the first weekend in May.

Saturday morning, we set off bright and early as the boys were paint balling near Swansea. After that, it was find the hotel and check in (well, if you were lucky and they’d got your room ready!), and then off by ‘shuttle taxi’ to the Liberty Stadium, where we were watching the Ospreys v Ulster. We had great seats and a great view. Shame the Welsh couldn’t overcome the Irish on this occasion.

boys were ‘special guests’, flag bearing at half time and as the teams came on for the second half. Their ‘guest’ status also meant that after the match, they got to stay behind for food in a function room, and most exciting of all, meet some of the players. I don’t know who was more excited, me (and the other Mums) or the boys, as Wales and Ospreys stars Rhys Webb, Justin Tipuric, Scott Baldwin, Dan Biggar, Dan Lydiate and Alun Wyn Jones made an appearance. Photo opportunities galore!

Then back to the hotel in taxi convoy, and installed in the bar for the evening. Apologies for being a bit of a lightweight and sneaking off to bed earlier than most…but I am getting on, you know 😉

Sunday morning, duly filled with a full English, we were off to Morriston Rugby Club for our tour match. Dads and refs with sore heads, and some very overtired boys probably contributed to us not winning, but an enjoyable spectacle nevertheless. Food for the boys in the clubhouse, presentations, and then all too soon it was over. Until next year.

I think I might fight the ex for it next time…

Thanks to the Squirrel Mums, Dads and boys. I had fun.