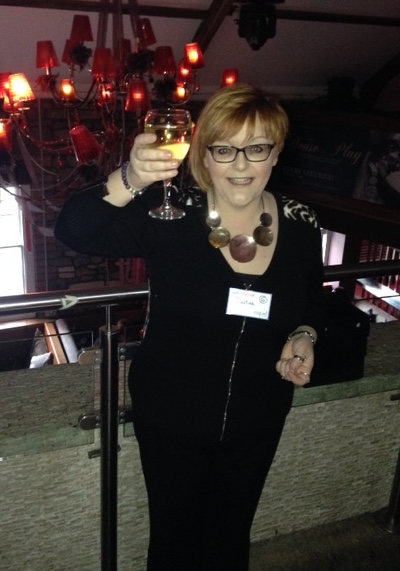 Well, sort of… In truth, I think I cheated a bit, but hey it’s a start!

Speed Dating for the almost 50s is not an easy thing to find. So when I stumbled on www.SpeedDater.co.uk advertising events for the 38-50 age range in Cardiff I signed myself (and my friend Jo) up.

We were supposed to go in March, but the event was cancelled due to low numbers. It was quite exciting then, when the April event looked to be going ahead. Home from work, I spruced myself up – I’m not exactly sure what one wears to speed date, but I chose something stylish and slightly ‘up market’… perhaps hoping that I might attract a date with similar credentials.

The event was held at Mocka Lounge on Mill Lane. With a glass of Dutch Courage in hand, we went to sign on. The website had already alerted us to the fact that ‘women’ was full, but that men were still being offered incentives to come along… rather disappointingly, we ended up with a 2:1 ratio – 10 women but only 5 men!

We were allocated a number and had to sit at the corresponding table. Women stayed put, men circulated. They were given some instruction about the order in which to visit the tables so that no women were sat twiddling their thumbs for too long. But these are men, and of course they can’t follow instructions… ;-). I was reminded of Wendy Cope’s poem ‘Bloody Men’…

First to approach my table was ‘G’. Grey hair in a crew cut, cheeky smile, checked shirt. His accent was clearly not local, and I found out he was from Dublin but had lived in Cardiff for 10 years. An ex-police officer, he now worked as a counsellor. Conversation was pretty easy. Four minutes went by pretty quickly and the bell to move on sounded. Not a bad start.

Next came ‘C’. Who smelled like a bonfire. Maybe he slept outdoors. He told me masses of information about the council house he had sold in Brighton for quarter of a million pounds and how he now lived in historic Merthyr Tydfil. His answer to the question about work was that he had ‘enough money to get by’ and found enough to keep him busy without working. He didn’t ask me a single question about myself. Nul points.

Cue ‘A’. Impeccably dressed, blazer and all. But if he was the good side of 50, I’ll eat my hat. He was a lovely chap with an interesting and varied life – a degree in art history, a period of work in Kenya. He worked as a social worker in adult mental health. When we found that we both loved poetry and Shakespeare I thought he was going to explode from excitement. Sorry ‘A’, it’s not enough. I actually have to find you attractive.

Number four was ‘N’. Tall, slim, relatively good looking. Unfortunately I recognised ‘N’ from a number of online dating sites, and this taught me a lesson. I think selectivity will be my motto going forward, as knowing that someone is touting on multiple dating sites does give an impression of desperation. Anyway. It turned out ‘N’ lived a little too close to me for comfort, even frequenting my local on occasion. He was separated, and visibly gulped when I told him how long my divorce had taken. By the time the bell rang, I had concluded he wasn’t quite ready for all of this (and I’m not sure I am either!)

Finally ‘M’. Certainly the best looker in the room, but somehow he didn’t seem in to this whole malarkey. A shame, considering he had travelled in from Abergavenny to investigate the Cardiff dating scene – Hopefully it’s not all as dull as this, mate! He was a bit of an adrenaline junkie, enjoying paragliding. Which is pretty much all I found out about him.

The final bell sounded.  Five guys … all of whom had too much to say about themselves, at the expense of finding out about the women. In theory we were now free to circulate and socialise. In practice, 3 of the 5 men left immediately, and the other 2 stayed about 5 minutes. Jo and I sat and chatted to two of the other women, along with the organiser, whom we questioned about typical numbers for his events. Apparently this was a lower turn out than usual (not sure I believe you), and as compensation we were invited to attend another event for free. In fact, he told us, if we wanted to come to the ‘youngsters’ night next Tuesday, he wouldn’t check our ages. A 49 year old woman in a room full of speed dating 24-38 year old men? My idea of hell, quite frankly. I think I’ll give it a miss.

A somewhat disappointing evening, truth be told. But worry not, dear reader, I shan’t let it put me off…