This challenge has been a long time coming….

The first time I got the urge to go parasailing we were on holiday in Cyprus. I really wanted to have a go…but there was no way my then husband Mike was letting me try it. I suppose looking back that he had a point, given that I was four months pregnant with our first child…

Fast forward some 17 years, and as my 50th birthday present, my wonderful daughter presented me with a voucher for parasailing. It was booked to take place during our holiday to Barcelona. The three of us. I was *very* excited.

Countdown to our holiday, and on 13th July we set foot on Spanish soil in one of our favourite cities. The day of the adventure would be the second day of the holiday… 15th July, at 18h00. We arrived and were motor-boated out to join the parasailing boat and crew. There was another group of three and a couple with us on board. We kitted up with harnesses and lifejackets, and motored out of Port Olimpic harbour into the bay alongside Barceloneta beach. To say the water was choppy was an understatement, as a brisk evening wind had picked up. We bounced across the waves, at times dropping like a stone (and often leaving our stomachs in the air). Looking back, I do wonder how none of us felt seasick! As the crew unfurled the parachute, a gust a wind tugged at it and the boat´s motor could hardly maintain our position… I was beginning to feel a little nervous.

The first group of three guys were up. Wobbling towards the rear of the boat to be fastened to the rig; three grown men looking decidedly uncomfortable… and rightly so, as their ´release´was far from dignified and they shot backwards into a rising wave before being hoisted into the air. We in the boat rode the waves, pulling them along for some 15 minutes before their equally undignified landing. Wet bottoms all round, they took their seats whilst the second pair went up. They fared rather better in the dignity stakes, but their ´flight´ involved them sailing at an angle to the boat rather than behind it, courtesy of the wind. Another 15 minutes of chopping across the waves, and they were down.

There was a brief exchange between captain and first mate, and Owen was beckoned. As he approached the platform to be attached to the rig, we hit a wave that almost cost him his balance… please don´t let my son fall overboard…

“Can you fly tomorrow?” asked the captain. I wasn´t sure how to react to that question. Part of me was cheesed off at having spent the best part of an hour on choppy waters for the benefit of other ´flyers´only to have our ´flight´cancelled. Part of me felt annoyed at the thought of having to go through all of this again the next day. But part of me thought that if the captain felt it best to curtail this activity in this wind… who were we to argue??! So, back to the shore we went, tired and disappointed, to rebook for the next day and make our way home.

We were booked for a 13h00 parasail, and arrived the requisite 15 minutes early only to be informed that there would be a delay due to a large group before us taking more time than anticipated. One could begin to wonder whether fate was trying to tell us something… Undeterred, we sat and waited patiently. And it was worth it. 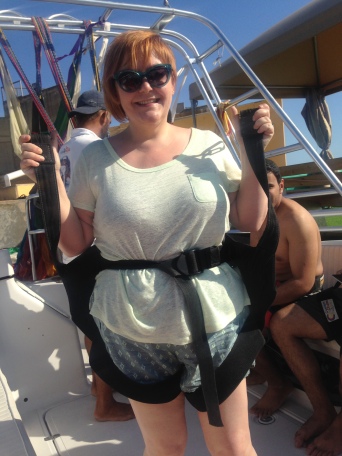 This time, we had the boat to ourselves. It was still windy, but nothing like the previous evening. We knew roughly what to expect, so although there were still nerves, they weren´t so bad. Out into the bay, and it was time to shackle up. Owen made his way first, rather more steadily than the last time, and was duly fastened in place. Me next, gripping tightly to the rig so as not to slip, as I was fastened in the middle. Then finally Georgia on my other side. We sat on the platform at the back of the boat…  Ready? And up we went.

No sooner had we started to ascend than all nerves disappeared. It was just a wonderful sensation, like sitting in a giant swing seat, rising up above the sea. “Wow!” Higher and higher as the rope attaching the parachute to the boat unwound, until we were at its full extent. High above the sea, the boat and its crew looking like miniatures on the dazzling blue water. Beneath us, windsurfers, banana-boaters, and sailors; beside us beach umbrellas all along the bay, with the beautiful backdrop of the city of Barcelona. We chatted, admired the view, swung our legs in the sunshine and shared a very special experience.

Our ´flight´was over all too soon, and we began our descent as the parachute was reeled back in. Closer and closer to the boat, until it was time to land. Georgia made it look easy, landing on her feet, as Owen and I were dumped unceremoniously on our bottoms!! Out of the harnesses, and back to shore – this time with a fulfilled and happy feeling of having accomplished this amazing challenge as a family.

We topped it off with paella at a beachside restaurant and a couple of hours on the beach, including a dip in the sea. All in all a quite excellent experience – thank you Georgia xx 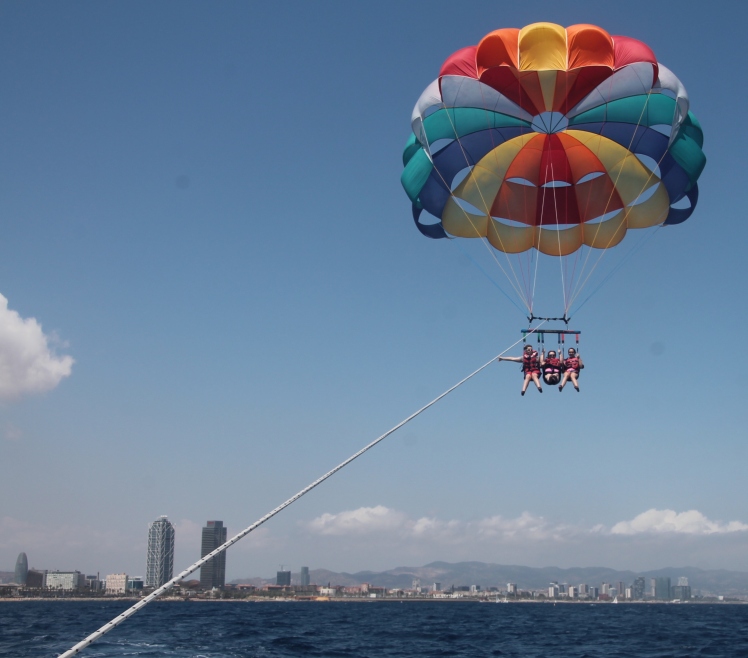